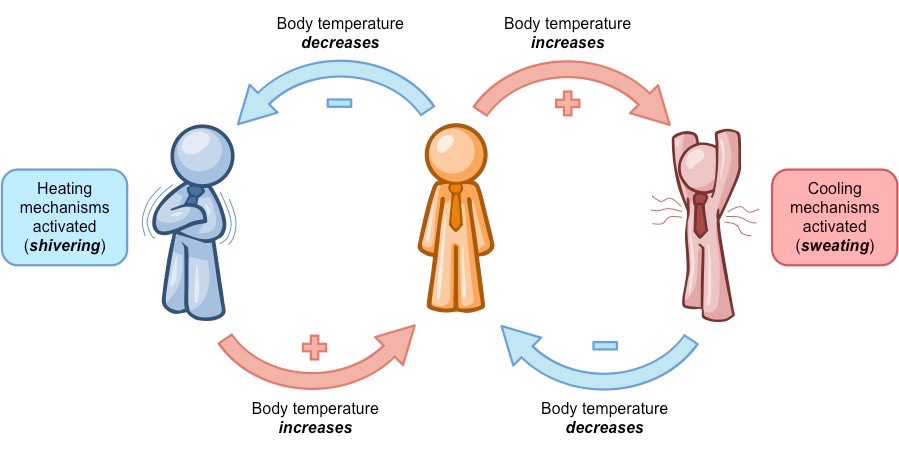 Feedback is defined as information obtained about a reaction to a product, which will allow modification of the product. Feedback loops are thus the process by which a change in the system results in an alarm that will trigger a certain outcome. This result will increase the change in the system or reduce it so that the system returns to normal. Some questions remain: How do these systems work? What is positive feedback? What is negative feedback? Where do we find these systems in nature?

Biological systems operate on a mechanism of inputs and outputs, each one caused by and provoking a certain event. A feedback loop is a biological occurrence in which the output of a system amplifies the system (positive feedback) or inhibits the system (negative feedback). Positive and Negative Feedback loops are important because they allow living organisms to maintain homeostasis. Homeostasis is the mechanism that allows us to keep our internal environment relatively constant: neither too hot nor too cold, neither too hungry nor too tired. The energy level an organism needs to maintain homeostasis depends on the type of organism as well as the environment it inhabits.

For example, a cold-blooded fish maintains its temperature at the same level as the water around it, so it does not need to monitor its internal temperature. Compare this to a warm-blooded whale in the same environment: it needs to keep its body temperature higher than that of the surrounding water, so it will spend more energy regulating temperature. This is a difference between ectotherms and endotherms: An ectotherm uses environmental temperature to control its internal temperature (for example, reptiles, amphibians, and fish), while an endotherm uses homeostasis to maintain its internal temperature. Endotherms can keep their metabolism at a constant rate, allowing for constant movement, reaction, and internal processes, while ectotherms cannot keep their metabolism at a constant rate. This means that their movement, reaction, and internal processes depend on adequate external heat, but it also means that they require less energy in the form of food, since their bodies are not constantly burning fuel.

Another example is what is known as the “evolutionary arms race,” in which a predator and its prey continually try to compete with each other. One such relationship is between nectar-eating birds and the flowers they feed on. Birds develop long beaks to access the nectar inside the flower. In response, the flower develops an increasingly long trumpet shape, in an attempt to prevent the bird from reaching the nectar. The bird responds by developing an even longer break. And so it goes on.

There is an amazing effect in nature where a tree or bush suddenly ripens all its fruits or vegetables, without any visible sign. This is our first example of a positive biological feedback loop. If we look at an apple tree, with many apples, seemingly overnight they all go from unripe to ripe to overripe. This will start with the first apple to ripen. Once mature, it emits a gas known as ethylene (C2H4) through its skin. When exposed to this gas, nearby apples also ripen. Once ripe, they also produce ethylene, which continues to ripen the rest of the tree with an effect much like a wave. This feedback loop is often used in fruit production, and apples are exposed to manufactured ethylene gas to make them ripen faster.

When tissue is torn or injured, a chemical is released. This chemical causes platelets in the blood to activate. Once these platelets have been activated, they release a chemical that signals more platelets to be activated, until the wound coagulates.

Temperature regulation in humans occurs constantly. The normal temperature of the human body is approximately 98.6°F. When body temperature rises above this, two mechanisms activate the body: it begins to sweat and vasodilation occurs to allow more of the blood surface to be exposed to the cooler external environment. As sweat cools, it causes evaporative cooling, while blood vessels cause convective cooling. Normal temperature is restored. If these cooling mechanisms continue, the body will cool down.

The mechanisms that then come into action are the formation of goosebumps and vasoconstriction. Goosebumps in other mammals raise the hair or fur, allowing more heat to be retained. In humans, they tighten the surrounding skin, reducing (slightly) the surface area through which they lose heat. Vasoconstriction ensures that only a small surface area of ​​the veins is exposed to the cooler outside temperature, retaining heat. Normal temperature is restored.

Osmoregulation refers to the control of the concentration of various fluids within the body, to maintain homeostasis. We will look again at an example of a fish that lives in the ocean. The concentration of salt in the water surrounding the fish is much higher than that of the liquid in the fish. This water enters the fish diffusion through the gills, the consumption of food and drink. Also, because the salt concentration is higher outside than inside the fish, there is a passive diffusion of salt into the fish and water out of the fish. The salt concentration is then too high in the fish and the salt ions must be released through excretion. This occurs through the skin and is highly concentrated urine. Also, high levels of salt in the blood are removed by active transport by chloride-secreting cells in the gills. This maintains the correct salt concentration.

Why is feedback important?

Without feedback, homeostasis cannot occur. This means that an organism loses the ability to self-regulate its body. Negative feedback mechanisms are more common in homeostasis, but positive feedback loops are also important. Changes in feedback loops can lead to various problems, including diabetes mellitus.